In the box with the capital G, balling the beat

Status, Chris Paul and John Wall in the league

Grabbin' mics till the knuckles'll bleed, 'cause I believe

The potent and the quote will have ya geek like speed

If rationale is naturale, then we'll weave

It's all edges and peas

Settin' picks, we on a permanent steez

I'm in a world where my princess is Leia

And she feeling my Vader

And my lure grows greater and greater

Been trill, nigga, process the data

You can't define us, XYZ-Z, it's the generation

Dude's nice, he tight, screwed in with some pliers

Yeah, show me, generation, show us what you gon' show us

Dude's rude and it's useless as coin, shoot 'em boys

Versed and rehearsed in the soothing of loins

Talk to Joey, Earl, Kendrick, and Cole, gatekeepers of flow

They are extensions of instinctual soul

One hit and readin' pages of Poe

Day of the dead, bury all the zombies instead

And it's just your aftermath, Busta cuttin' your dreads

Smoke tree on niggas, sizzle out your USB

Surge pricing on these Ubers, I'mma get me a cab

Yo, where Jarobi at?

I be in NYC waiting for that law to pass

[?] been waiting for a Jet's title since last

[?] gangrene on that ass

In the church of Busta Rhymes it's my sermon you're getting horizontalspittin', I'm the exorcist of your writtens

This mad city's not a game, easy, quiet on set

Phife, student of the past, trailblazing the day

Now they knowledge'in and tryin' ta swept up in a phase

Dis Generation è tratto dall'Album We got it from Here... Thank You 4 Your service 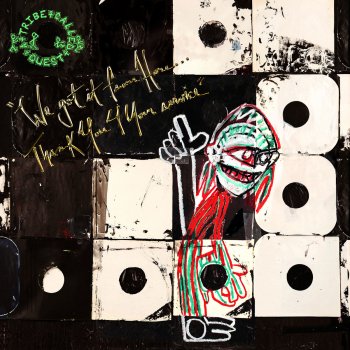 We got it from Here... Thank You 4 Your service Data di pubblicazione: 11 novembre 2016