Guarda il video I Shall Be Free No. 10

I ain't different than anyone

Ain't no use to talk to me

It's just the same as talking to you

I was shadow-boxing earlier in the day

I figured I was ready for Cassius Clay

Well, I don't know, but I've been told

The streets of heaven are lined with gold

I ask you how things could get much worse

If the Russians happen to get up there first

Now, I'm liberal, but to a degree, I want everybody to be free

But if you think I'll let Barry Goldwater

Move in next door and marry my daughter

You must think I'm crazy

Well, I set my monkey on the log and ordered him to do the Dog

He wagged his tail and shook his head

And he went and did the Cat instead

I sat with my high-heeled sneakers on

Waiting to play tennis in the noonday sun

I had my white shorts rolled up past my waist

And my wig-hat was falling in my face

But they wouldn't let me on the tennis court

I got a woman, she's so mean

She sticks my boots in the washing machine

Sticks me with buckshot when I'm nude

Puts bubblegum in my food

Now, I got a friend who spends his life

Stabbing my picture with a bowie-knife

Dreams of stranglin' me with a scarf

When my name comes up he pretends to barf

I've got a million friends

Now, they asked me to read a poem at the sorority sister's home

I got knocked down and my head was swimmin'

I wound up with the Dean of Women

I'm gonna grow my hair down to my feet, so strange

And I'm gonna ride into Omaha on a horse

Out to the country club and the golf course

Well, you're probably wondering by now

Just what this song is all about

It's nothin', it's somethin' I learned over in England

Testo I Shall Be Free No. 10 powered by Musixmatch

I Shall Be Free No. 10 è tratto dall'Album Another Side of Bob Dylan 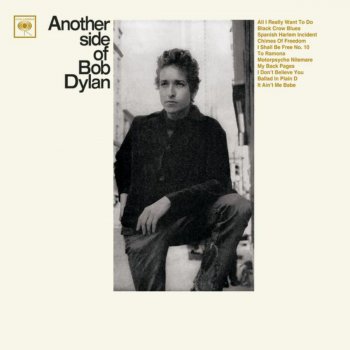 Another Side of Bob Dylan Data di pubblicazione: 8 agosto 1964