From a Lanarkshire town, came a man of great renown

A bevan boy by trade, he worked and then he played

With Albion Rovers, he soon made the grade.

Because Jock Stein was a man, who was always in command

He was the greatest ever seen, an he love the Bhoys in green

Jock Stein, was a Celtic fan.

For seven years or more, he made the Rovers roar

In Wales he settled down, with Llanelli Town

When he started full time football, a new lease of life was found.

In 51 of late, a simple twist of fate

Brought him back to Scotland, and through the Parkhead gates

To captain he progressed, and he brought some great success

The double and the Coronation Cup with us he blessed.

He crossed the Country wide, to a new Dunfermline side

He brought them Scottish glory, and a European pride

He moved to Hibs, and then to Paradise again

13 years had gone, big Jock he move on

He won the European Cup in Lisbon in the sun

With 9 flags in a row, and silverware galore

And a whole generation was sad to see him go.

To Elland Road was bound, but he never settled down

The Scottish fans were calling him back to his native town

But he left us special memories right up until he died. 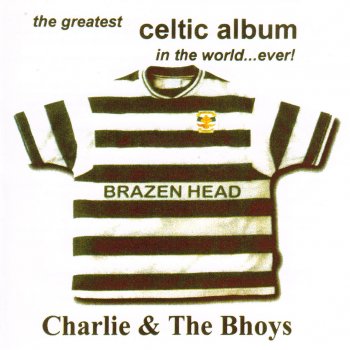 The Greatest Celtic Album In The World... Ever! Data di pubblicazione: 31 gennaio 2005

Tutti i testi di Charlie and the Bhoys

Charlie and the Bhoys: i testi più cercati

Charlie and the Bhoys

Where are the lads that stood with me