Welcome to the ill world of Mr. P-O

If it ain't about bread, what we gon' speak fo'?

You better get a leash 'cause yo' freak ho

Roscoe P. Coltrane in these bars

Man, it's Ralph Lauren, this ain't no damn Chaps

It's all Polo, I'm so pro though

Talkin' about cheese and this ain't no photo

You better get out of my house and shit

I think I threw up in my mouth a bit: I'm sick

Niggas be lyin', talkin' about they bust a heater

Once I see him, maybe more like Justin Bieber

Leavin' my rivals underground, like Skyzoo's, how I do

I have him layin' in the street and bleedin', butt-naked

With a bullet in his mothafuckin' head like Erykah Badu

I find irony in bein' in a place

I tell a nigga: break bread or take lead

I'm tryin' to get rid of this weight, like K-Fed

Me and Denaun got a gangsta bond

That ain't the prom

The next MC that rhyme official, with ref, with a whistle

If you rhymin' "packin' a MAC" with "back of the Acura"

Or perhaps you can't match my spectacular vernacular

You still rhymin' bottles with models, college with knowledge

You thugs funny, comparin' 5'9" to anybody

You comparin' Superman to Bugs Bunny

I'm like a white Michael – Vick, psycho enough to stick

Michael J. Fox in a microwave with a Rott

I might make a little Alizé with a side of NyQuil

And ride a motorcycle bike

Right through the side of my high school

Satan's disciple with a sniper rifle

And a knife and a white diaper

Liable to shit on you while I snipe you

So dope he gets off opiates

What an appropriate way to start off his day!

He may just smart off to Dre

He may be hard to contain

'Cause his rage is so hard to gauge

See, Hannibal ate his face, and met Jason, gnawed off his leg

Amazin' hard-on for razors and blades

And anything sharp, even poisonous darts

It all plays a major part of his game

Holy water won't ward him off, crucifixes won't do the trick

He's so sick, it's ridiculous

Sawed the crazy part off his brain, he's still insane

Why's there bloodstains on his carpet, mane?

There's some crazy shit goin' on in Shady's apartment again

Okay, it's back to the blocks, slingin' yay like the old days

Superman on the beat, I carry my whole state

You wooden legs to a house: you can't hold weight

A little bit of this twisted out with Obama in it

Mr. Porter back with anthrax, like Osama sent him

Bitch, I'm all that, I drive the girls crazy

They gotta look at Rorschachs to get they thoughts back

I make 'em all cry with big dick and raw sack

The potblood of science to return a raw rap

Y'all bitches should call Nickle the Don Bishop

A poet, a mixture of Don Goines and John Grisham

Step up in here with the Slaughterhouse

C.O.B. Gang will approach you

And bend your gun barrel to a horseshoe

Only fuck with monsters, we the truth

Monsters will pop up on you

I can't even see the booth, I could fit in Stevie's shoe

I'm sick, I got the Desert Eagle flu

Outta my mind if you can imagine

Got the streets goin', dude, it's tremendous

If I come for your blood, I ain't gon' be usin' syringes

Them pills shoulda killed my ass

But they didn't; they just made me stronger

Like the Six Million Dollar Man after the crash

It's Aftermath, bitch! And my milk glass is still half-empty

They need to invent somewhere new to send me

As sick as I'm getting

They'll stick me in a conventional oven

With a rotisserie setting and won't even notice me sweating

Shit, I done made a verse, said some foul shit

Tryna go back fix it, fucked around, and just made it worse

Yeah, I'm back, looking no worse for wear

Got these haters mad enough to rip off their hair

And start punchin' the air

Panties so in a bunch that they can't function

It's Shady and Royce, fuck yeah! What a dysfunctional pair!

So stop actin' like a punk, get a pair!

Take a pill and fall the fuck out, spill your lunch in the chair!

Look, I'm sick, somebody better get the Dimetapp

Who I gotta shoot just to prove that I can rap?

People ask where my shine is at

I say check the liner notes, I done done all kinda crap

I am so much of a star, bitch

That I can fart and piss on the red carpet

My debit card's got a helmet and a harness

Hey, meet demands, but they all are harmless

At shows my riders always the largest

And red M&Ms chartered from Charlotte

Look, and if you try to act dumb and start shit

Infected — you know the deal

If you wanna play sick, we can all get ill

I made you bitches, I don't need you chumps

Y'all got cheese and I need my chunks

Hurry up, so I can go to burn rubber

And get some more dunks

Now, if your attitude determines your latitude

This house that we call hip-hop, I'm in the attic, fool

A mic and two turntables, fit for the unstable

Converted to a padded room

Keep a street sweeper; in fact, I call the mag a broom

You musta had yourself a bag of shrooms

I make a call, make 'em fake a fall

My clique is too sick, say goodbye

In the streets where the stakes is high, like Ruth's Chris

I'm from the city of true shit

Where the mayor went to jail

For bein' a player right after Proof split

Levels the head of competitors, Royce that

'Til Hex Murda get his regular voice back

Ras, I got ya, look scared at ya, blast from ya

From a block away; ask Tricky, I'm that niggie

In the booth, takin' the track with me

In order to leave it alone, you have to ween me off

That Lorena Bobbitt chopper will knock a weenie off

Put your body between chalk

I'm with the best rapper alive, put somethin' on it

Your sound's plain as a cheeseburger with nothin' on it

I'll do a hundred-yard dash just to slash Kim Kardash'

You may look like the passenger for that, don't be a smartass

Yeah, laugh while you sit there

Thinkin' that the hard part passed

I'll cut your fuckin' balls off, homie, my saw's off the chain

I chopped the bitch in half with it, sawed off her legs

And the top half of the torso fuckin' crawled off insane

Took the Elephant Man's skull, fucked it, and put it right back

Handed my dick to Bubbles

While he sucked it and licked my nut sack

Gave him a reach-around

While I fucked him right in his butt crack

Nah, I ain't takin' it back, faggot, fuck that!

I give a fuck about nothin', so here's where you fucked up at

Don't go touchin' that can

Man, you don't wanna open up that 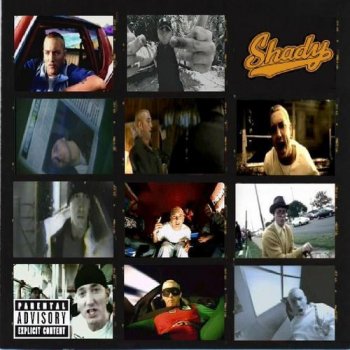