The Night Josh Tillman Came to Our Apartment testo

Oh, I just love the kind of woman who can walk over a man

She says, like literally, music is the air she breathes

And the malaprops make me want to fuckin' scream

I wonder if she even knows what that word means

Well, it's literally not that

Of the few main things I hate about her, one's her petty, vogue ideas

Someone's been told too many times they're beyond their years

By every half-wit of distinction she keeps around

And now every insufferable convo

Features her patiently explaining the cosmos

Of which she's in the middle

Oh my God, I swear this never happens

Lately, I can't stop the wheels from spinnin'

And I fumble with her buttons

I found her naked with her best friend in the tub

We sang "Silent Night" in three parts which was fun

'Til she said that she sounds just like Sarah Vaughan

I hate that soulful affectation white girls put on

Why don't you move to the Delta?

I obliged later on when you begged me to choke ya

The Night Josh Tillman Came to Our Apartment è tratto dall'Album I Love You, Honeybear 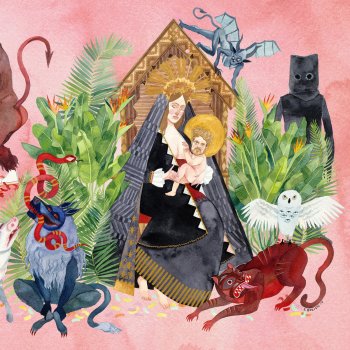