Give them Geto Boys a ring, man

Yeah man, I got Willie D on the other end

I been kickin a few lyrics in the back of my mind, man

And I′m tired of motherfuckers disrespecting us

Because we're Black-owned and won′t sell out

So check this out

We need to get together

And go to that other level of the game

Say no more, J, we're on the telephone

We get them motherfuckers, man

I′m an Assassin, kickin' ass on the double

No motherfucker alive's gonna stop me

So fuck you and your goddamn posse

It′s time to step on some motherfuckin toes

I wanna know what the Hell's goin′ on

I'll kick your ass and take the motherfucker

Everybody know New York is where it began

So let the ego shit end

Black radio is being disowned

Not by the other race, but its own

Because the radio is all about (politics)

Akshen is my identity, whoever you be

My last go, the radio struck me with a low blow

They put 'em on the streets like a bitch

I never sold the mess

But if I did, it would be for my goddamn self

Can you adjust to the wholesale bust

Bushwick, tell these motherfuckers what′s up

When will you stupid motherfuckers learn

In this game one way or another you get burned

You end up behind bars

Or lyin′ on your back in a motherfuckin morgue

And your gal'll find another nigga

′Cause the low-acting bitch ain't nothin but a golddigger

I′ll fuck her but my money is a no-no

Those tie-wearin′ bitches can suck my dick

They try to ban my style of teachin′

But freedom of speech allow me to keep speakin'

It′s deep into the heart of the school system

White's get more funds from the state

And this is why minorities learn so late

Some of us make it to college

And take a test to the highest degree with limited knowledge

Most of us won′t pass the bitch

And those rotten-ass motherfuckers know this

I'm not Malcolm X or Farrakhan

After this one, I′ll guess I'll have to pack a gun

So if you wanna fuck with this brother

You better be ready, motherfucker

You're gonna have to G.O.

Willie D is not a biggot and he won′t be

I just educate minds through reality

This ain't no motherfuckin′ "Back to Africa"

Try to pull that shit, we'll have a massacre

Our ancestors were killed at will

We fought back to exist

Now we′re killin' one another, ain't that a bitch?

Ready Red, comin′ at ya

You take nothin' from me, so stop trippin′

Wearin dresses and shit, what the fuck, is they gay?

A colorblind society we'll never be

Unless we agree (in harmony)

Hey Jay, this is the president of White Owned Records

But wanted to ask you to keep your boys' quiet

If you don′t, we will

We take 95 percent of your company and you take five

And we'll make you famous for 15 years

It would take you lifetime by yourself

Because you know your people don′t stick together

What you say about that, boy?

I would advise you not to talk to me like that, boy

Just who the Hell you think you are anyway?

I ain′t's to be fucked with

And if you wanna go to war, I′ll take you to war

Testo Do It Like A G.O. powered by Musixmatch

Do It Like A G.O. è tratto dall'Album Grip It! On That Other Level (explicit) 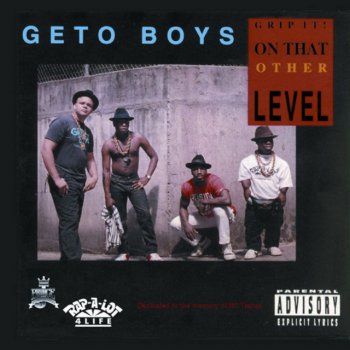