Niggas hangin′ deep on the cut

Sippin' on a motherfuckin′ 40 ounce of Gooden

Ain't shit changed in my hood since '86

All the triflin′ bitches in my hood smoked moes

And all the gangsta ass niggas rode vogues

Firin′ up fry flaggin' hoes out the roof?

Car down crush? and fresh paint

Eight in the back you hear my Alpine crank

All of my niggas they had a truck load of dope

It′s 1993 new bounds are being broken

If you ain't bangin′ then you gots to be smokin'

Cause I remember back when the nigga had green

Funny how a nigga, sold a key or two

Reachin' out his arm tryin' to shake a nigga hand

But I just walked away and left his shit to hang

Cause back in the game I had a motherfuckin′ thang

I look around and I say "This!"

And I could give a fuck if the nigga gets pissed

Huh like it ain′t shit yeah. I thought you knew. It ain't shit. Uh, yeah.

Creepin′ comin' up a yellow stonin′

Put my shit in park and drunk a St. Ises with my homey

Reminisced on fast times past times and shit

Smokin' on some bud I came acroos my nigga Kick

Chillin′ with this girl and a gat across his laps

He told what had happened and now I′m thinkin' FUCK

My motherfuckin' neighborhood is quick to get with static

Never showin′ fear cause these niggas never had it

Quick to kill your ass quick to jack your car

So nigga lay it down or die motherfuckers die

Fuckin' with my family you dick is in the paint

Shit to brake 'em off I'm brakin′ ′em off with chunks

Killin' you ass for kicks doin' shit for the murder

Cause fuckin′ with the kid is the grounds of being drugged

Until you face to face wiith Scarface you ain't done shit

I′m a born killer, I really thought you knew bitch

It ain't shit you know what I′m sayin'? Yeah.

Testo It Ain't powered by Musixmatch

It Ain't è tratto dall'Album Till Death Do Us Part 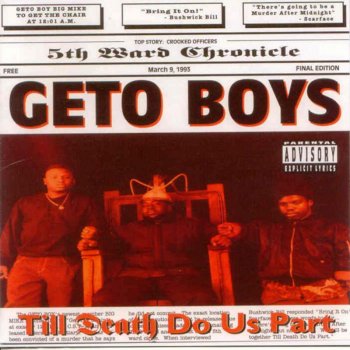 Till Death Do Us Part Data di pubblicazione: 1993