The name describes the background, and it describes it well

There′s so much trouble in our life, we got a story to tell

Just like time, we did the crime, and had the cops so sick

They tried to catch us, nothin happened, cause we're much too slick

I′m Juke Box, the back-breaker, pose a threat on your life

And I'm Johnny C the Prince of rhymin, imitators die

You know why? Boy, it's the vengeance of my rappin ally

He′s Ready Red, the top contender, other boys who oppose

So catch the square, and he′ll be there, and he'll break your nose

I run the nation, say what, Take out the Ku-Klux Klan

And play con on your sister at Tuffy Park

Boy, I saw your Filas, say what, And I was on cloud nine

I said Box, busted out, I got to make those mine

I jacked you up off your feet, I snatched out your strings

Size 10, and just right for me to do my thing

I, what, broke out the store window, with a crime on his mind

With no thoughts or assumption, word, of doin the time

The cop screamed, boy freeze! .45 in his hand

I dropped the VCR, broke out and ran

I stole the jams off your car, and now it′s up on blocks

I snatched the emblem off your Caddy, boy, and you're red hot

Now for all you small timers, we got to make you slob

Cause we don′t only steal cars, homeboy, we also rob

I robbed a store to get a dollar, I snatched a purse, the lady hollered

Then the cops come to my door, and snatch me up right by the collar

And now they′re takin me to jail, yo-yo, a man-made hell

But from behind the steel bars, we could never prevail

Tearin down the neighborhood, but we don't do drugs 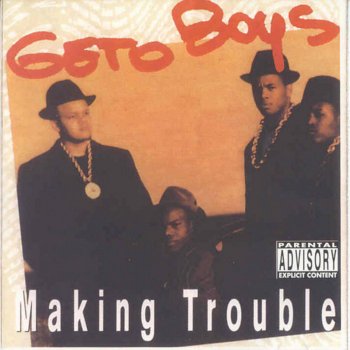