{What you doin' on our turf, punk? Got a message for Smokey

Give it, you Smokey, man? Give it

If you ain't Smokey, it ain't yo' motherfuckin' message

Motherfucker, I said gimme the message}

{It's from Willie, in the slam, nigga, you been busted?

Yeah, the man picked me up

Well, I ain't got no fuckin' time to play witchu

{Willie's in Warwick, doin' 1 to 3, told me to tell y'all motherfuckers

To keep cool, he be out one way or another, quick

Maybe I could stick around for awhile, naw, that's out, man

You know? What can we, The Lords, do with a punk like you?}

I put trademarks around your fuckin' eye}

Yeah, it's on this one

Yo, Gambino niggas, who swipe theirs

Deluxe rap cavaliers, midgets who steal beers, give 'em theirs

Many raps they crochetin', ay yo, Iron

These niggas portrayin' but haven't been payin'

For real, slide on these niggas, like flesh fear

Connectin' with the hot style is done

Light up a challis

I run with nuttin' but the wildest, foulest

Niggas on the hit out, ay yo, Iron, bite my shit out

Been doin' this century kid, just meant to be

The greatest lesson is 'Don't owe, you might get stole on'

When I go bury me wit Valow on

Then after I get mines, y'all can do what y'all wanna do

Cool Nauticas, Jamie Summer got trained on the tour bus

Dead on the prosecutor, smacked a juror

Me an' my girl'll run like Luke an' Laura

We sit back on Malayan Islands

Sippin' mix drinks out of boat, coconut bowls, we whylin'

Cappadonna, never caterin' to none

My microphone an' three verse weigh a ton of slaughter

You oughta, five thousand, back across the water

My laboratory story keep me flowin' with the glory

I could blow the sky like the stormy wind blew

I cut your face up, rough fifty, sure while you're smilin'

I leave you smoked like a crack head on a mission

Two tokes of mic dope, one stroke of elegance

Person to person, it'd be hard for you to take a trophy

When I bow, all praises due to Staten Isle

Every evenin' I have a by myself meetin'

Thinkin' who's gonna be the next to catch a beatin'

From my mental slangin', bitchin', rap twist the point of warfare

Chance him, that's what they said, threw up a ransom

I jacked it, stripped the beat naked an' packed it, gimme my rewards 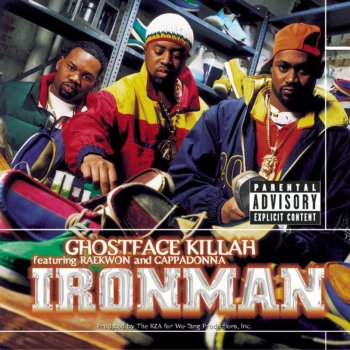