There was a minute′s pause perhaps. The Psychologist seemed about to

Speak to me, but changed his mind. Then the Time Traveller put forth

His finger towards the lever. 'No,′ he said suddenly. 'Lend me your

Hand.' And turning to the Psychologist, he took that individual′s

Hand in his own and told him to put out his forefinger. So that it

Was the Psychologist himself who sent forth the model Time Machine

On its interminable voyage. We all saw the lever turn. I am

Absolutely certain there was no trickery. There was a breath of

Wind, and the lamp flame jumped. One of the candles on the mantel

Was blown out, and the little machine suddenly swung round, became

Indistinct, was seen as a ghost for a second perhaps, as an eddy of

Faintly glittering brass and ivory; and it was gone--vanished! Save

For the lamp the table was bare.

Everyone was silent for a minute. Then Filby said he was damned.

The Psychologist recovered from his stupor, and suddenly looked

Under the table. At that the Time Traveller laughed cheerfully.

′Well?' he said, with a reminiscence of the Psychologist. Then,

Getting up, he went to the tobacco jar on the mantel, and with his

Back to us began to fill his pipe.

We stared at each other. ′Look here,' said the Medical Man, ′are you

In earnest about this? Do you seriously believe that that machine

Has travelled into time?'

′Certainly,' said the Time Traveller, stooping to light a spill at

The fire. Then he turned, lighting his pipe, to look at the

Unhinged, helped himself to a cigar and tried to light it uncut.)

′What is more, I have a big machine nearly finished in there′--he

'You mean to say that that machine has travelled into the future?′

'Into the future or the past--I don′t, for certain, know which.'

After an interval the Psychologist had an inspiration. 'It must have

Gone into the past if it has gone anywhere,′ he said.

′Why?' said the Time Traveller.

′Because I presume that it has not moved in space, and if it

Travelled into the future it would still be here all this time,

Since it must have travelled through this time.'

′But,' I said, ′If it travelled into the past it would have been

Visible when we came first into this room; and last Thursday when we

Were here; and the Thursday before that; and so forth!'

'Serious objections,′ remarked the Provincial Mayor, with an air of

Impartiality, turning towards the Time Traveller.

′Not a bit,' said the Time Traveller, and, to the Psychologist: ′You

Think. You can explain that. It's presentation below the threshold,

'Of course,′ said the Psychologist, and reassured us. 'That's a

Simple point of psychology. I should have thought of it. It′s plain

Enough, and helps the paradox delightfully. We cannot see it, nor

Can we appreciate this machine, any more than we can the spoke of

A wheel spinning, or a bullet flying through the air. If it is

Travelling through time fifty times or a hundred times faster than

We are, if it gets through a minute while we get through a second,

Time. That′s plain enough.' He passed his hand through the space in

Which the machine had been. ′You see?' he said, laughing.

We sat and stared at the vacant table for a minute or so. Then the

Time Traveller asked us what we thought of it all.

′It sounds plausible enough to-night,' said the Medical Man; ′but

Wait until to-morrow. Wait for the common sense of the morning.'

'Would you like to see the Time Machine itself?′ asked the Time

Traveller. And therewith, taking the lamp in his hand, he led the

Way down the long, draughty corridor to his laboratory. I remember

Vividly the flickering light, his queer, broad head in silhouette,

The dance of the shadows, how we all followed him, puzzled but

Incredulous, and how there in the laboratory we beheld a larger

Our eyes. Parts were of nickel, parts of ivory, parts had certainly

Been filed or sawn out of rock crystal. The thing was generally

Complete, but the twisted crystalline bars lay unfinished upon the

Bench beside some sheets of drawings, and I took one up for a better

Look at it. Quartz it seemed to be.

′Look here,' said the Medical Man, ′are you perfectly serious?

Or is this a trick--like that ghost you showed us last Christmas?'

′Upon that machine,' said the Time Traveller, holding the lamp

Aloft, ′I intend to explore time. Is that plain? I was never more

Serious in my life.'

None of us quite knew how to take it.

I caught Filby's eye over the shoulder of the Medical Man, and he

Winked at me solemnly. 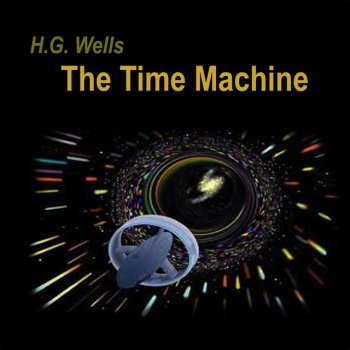