(11 seconds of audio collage at the intro)

Suckers steal a beat, when you know they can't win

You stole the beat, are you havin fun?

Now me and the aud's gonna show you how it's done

You are what I label as a, nerver plucker

You're pluckin my nerves, you mc sucka

I thought I oughta tell you, better yet warn

That I am like a stop, and my word is bond

The code's three-six, the name is lyte

After this jam, I really don't give a damn

Cause i'ma run and tell your whole damn clan

Milk's bodyguard, is my bodyguard too

You wanna get hurt, well this is what you do

You put your left foot up, and then your right foot next

Thirty days a month your mood is rude

We know the cause of your bloody attitude

Your style is smooth, even for a cheatin mic

You shoulda won applause as a rakim sound-alike

Don't turn away, I think you should listen close

You fuckin liar, you're chasin a chuckwagon

The only way you learn you have to be taught

That if a beat is not for sale, then it can't be bought

When you leave the mic, you claim it's smokin

Unlike rakim, you are a joke

And I think you oughta stop, before you gets in too deep

Cause with a sister like lyte, yo I don't sleep

When I'm in a jam, with my homegirl jill

My cousin trey across the room with a posse to kill

So I step in the middle, shake it just a little

Wait for some female to step up and pop junk

Give my cousin a cue, treat the girl like a punk

Now I'm not tryin to say that I'm into static

But yo if you cause it, yup, we gotta have it

Cause I ain't goin out like a sucker no way

We can go for the hands, better yet for the words

Cause you'll be ignored, and at the same time, I'll be heard

Throughout the city, the town and the country

The beat is funky, my rhyme is spunky

There is no delayin in the rhyme I'm sayin

Neither are the flaws of what my dj is playin

So sit back jack, and listen to this

Cause I'm just about ready to fly this fist

But I'll wait for the day or night that you approach

And i'ma serve then burn ya like a piece of, toast!

Pop you in the microwave to watch your head bubble

Your skin just crumble, a battle's no trouble

Get my homegirls dohni and kiki to get stupid

This thing called hip-hop, lyte is rulin it

I hate to laugh in your face, but you're funny

Your beat, your rhymin, your timin, all crummy

On the topic of rappin, I should write a pamphlet

Better yet a booklet.

Your rap is weak homegirl

And it's definitely crooked!

Others write your rhymes, while I write my own

I don't create a character, when I'm on the microphone

I am myself, no games to be played

No script to be written, no scene to be made

I am the director, as far as you are concerned

You don't believe me, then you'll have to learn

This ain't as hard as mc lyte can get

And matter of fact, you ain't seen nothin yet!

So never let me step into a party hardy

Talk to some people and then hear from somebody

'You wanna battle? ' cause you know where I am

When a, mic is handy, ten feet away

When it comes down to it, the nitty gritty 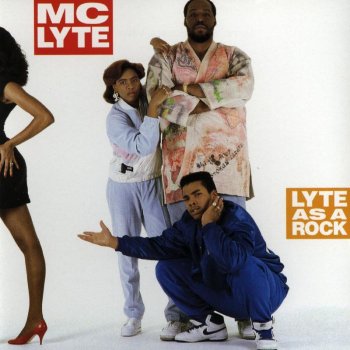 da I Cram to Understand U: leggi il testo