From the gang called Niggaz With Attitudes

I got a sawed off

And bodies are hauled off

You too, boy, if you fuck with me

The police are gonna have to come and get me

Off your ass, that's how I′m going out

For the punk motherfuckers that's showing out

Niggas start to mumble, they want to rumble

Mix 'em and cook ′em in a pot like gumbo

With a gat that′s pointed at your ass

Ain't no telling when I′m down for a jack move

Me and you can go toe to toe, no maybe

Yo weekly, monthly, and yearly

That I'm down with the capital C-P-T

Boy, you can't fuck with me

So when I′m in your neighborhood

′Cause Ice Cube is crazy as fuck

As I leave, believe I'm stomping

But when I come back, boy

Tell 'em where you from!

Yo my rep gets bigger

I′m a bad motherfucker and you know this

But the pussy ass niggas won't show this

But I don′t give a fuck, I'mma make my snaps

If not from the records, from jacking, or craps

Or when illegally armed, it's called packing

I find a good piece of pussy, and go up in it

So if you′re at a show in the front row

I′mma call you a bitch or a dirty ass 'ho

You′ll probably get mad like a bitch is supposed to

But that shows me, slut, you're composed to

A crazy motherfucker from the street

For any dumb motherfucker that starts static

Not the right hand, ′cause I'm the hand itself

Every time, I pull a AK off the shelf

Security is maximum and that's a law

See, ′cause I'm the motherfucking villain

The definition is clear

You′re the witness of a killing

That's taking place without a clue

And once you′re on the scope

Your ass is through

But a nigga like Ren is on a gangster tip

Eazy is his name, and the boy is coming...

Is a brother that'll smother your mother

And make your sister think I love her

And if I ever get caught I make bail

See, I don′t give a fuck, that's the problem

I see a motherfucking cop, I don't dodge him

But I′m smart, lay low, creep a while

And when I see the punk pass, I smile

To me it′s kind of funny

The attitude is showing

But don't know where the fuck he going

Looking for the one they call Eazy

But here′s the flash: they never seize me

Ruthless, never seen, like a shadow in the dark

Except when I unload

You see a spark and jump over a hesitation

Feel a little gust of wind and I'm jetting

But leave a memory, no one will be forgetting

So what about the bitch who got shot? Fuck her!

You think I give a damn about a bitch? I ain′t a sucker

This is an autobiography of the E

And if you ever fuck with me

You'll get taken by a stupid dope brother who will smother

Word to the motherfucker

Damn, that shit was dope! 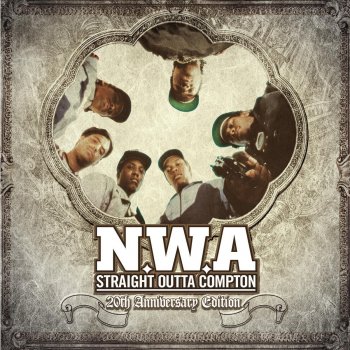