I'm the nigga walkin with his finger on the trigger

Make enough figures until my pockets get bigger

I'm rollin with a mob and runnin from the cops

They had it, cause I flip just like a acrobatic

I'm always on the corners rollin up Sess

When I dress it's never nothin less than Guess

So I walk with a bop and my hat turned back

I got it goin on, my knuckle game is strong

Sip Dom Pérignon and then carry on

Strippin mad hoes and kick em to the side

See I'm the type of brother who keeps a four-pounder

Start a lot of shit and shoot at out of towners

At every block party, I try to catch a body

All for props, tell your pops call the cops

See now I'm on the run, but still havin fun

Livin by the Mac, my gear is all black

I keep killin, because I'm ready and I'm willin

And I'm a villian

I got beef with the President and still lovin it

Trying to make plans to overthrow the government

They'd rather stand on the corners and receive a cuff

Around they wrist, you don't like the sound of this

Rebel, but my country doesn't want me

They'd rather hunt me, but you'll never catch us all

Full of anger, all about danger

Pullin out my banger, stabbin up a stranger

I hear Walkie Talkies in my sleep

And use a whole lot of slang when I speak

Walking with a vest, the projects is where I rest

And the streets keep me stressed

Staring at your face, wait for you to make a sound

That's when I take you down, shoot you up and suit you up

All in black, and put you in a box

Aiming at your temple, so take the diamonds off your hands

And this you should fear

The maniac keeps killing, I'm known as a outlaw

Cause I'm a villain

I keep bullets racing out the barrels of a Magnum

Put 'em to sleep and leave the doctors to tag them

An outlaw, although I never wear a holster

In every town you see my face is on a poster

Hear so many gunshots my eardrums should pop

To the concrete, I got police putting chalk on the street

And this is done once a week

I never play with a AK

Because I'm fine with a .9 and if caught I'll do lesser time

Sometimes you gotta plan shit, and understand it

Without a gun in it, Nas is runnin it

I stay blunted, I'm the project's most wanted

My cassette is the clip and your radio's the Automatic

So when I'm in your town, "duck down"

Or take fire, whatever you desire

Never fight this, you'll be sightless when I strike this

So roll the dice, I'm stoppin the bank

It's ill how I got the pen droppin the ink

No one can stop this Apocalypse

Nas the parlayer, you better say your prayer

Parlé slow and wear horns, not a halo

And keep killin, cause I'm a villain 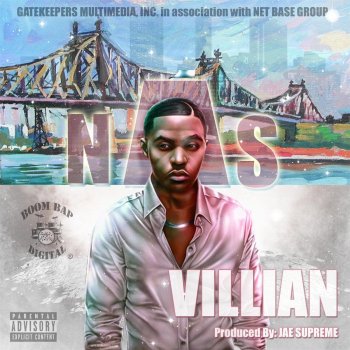