Black Rain, there's no chance to escape it

You know it seem like sometimes, there's nothin but bad luck?

You've been wettin us up from day one

We ain't never see a high point, how come

You've been wettin us up from day one

We ain't never see a high point, how come

We live those big money dreams

A six scene and so peelin

Lust to touch everything

Still but no feelins

We move on through these stars

And when it's on it's on we movin strong

You know the rules, roll with fools

Who use two's no trainin

Hit your block, non-stop, no aimin

Black-Rainin, and man the forecast is bleek (yeah)

Stay inside, they said it's goin for weeks

It's war in the streets

Gangbangin and wearin east (say what)

Now the city that never sleeps will never see peace

I've had enough of still killin each other over nothin

Now there's more of us willin to die over colors

Feedin our seeds, makin em strong with pain, the game

Cause it's right in our eyes, Black Rain!

I seen it all

When the black rain falls

Why will you fall

Black rain, you got time to explain

Damn hittin pain from years ago

Only you know, how the story goes

You took what I got left all in me

First you came, now the Lord's callin me

All in me, is what my Outlawz trained me

And all in me, is what my brothers gave me

And all you see is just another young thug

But please let my baby-boy play in the mud

Rain or sun, please let him have some fun

Don't wet the sidewalk, Daddy walks it to from

And don't let the pain that I touch he feel

And don't let him trust no snakes, that's real

It's cold outside in the middle of the summer

Cries inside of the minds of the younger

It's like a bunch of black clouds we under

From day one to day none my heart get no more

Since I can't see clear, I stumbled home

It ain't fair, the air out here, too thin

I grieve and don't believe in the hearts of men

It's triflin', the life we in needs change

Till then, we hustlin, it's black rain

Yo, ain't no way out the hood

Can't stay out the hood

Hustle hard so every day out is good

The day seem dark, but the nights is bright

Ain't nobody goin down, so we likes to fight

Cops that come around tryin to cuff me up

Lock a brother down tryin to rough me up

My baby due soon I ain't playin with y'all

It happened so fast, first day and then gone

A million new things on coke this year

We tryin to live long, can you tell me how?

I'm hopin that my heat don't fail me now

Every time I thinkin it's death, they tryin to tear me down

But see my in the flesh, can you stare me down

I do it for my fans, cause I'm livin for em

We seein clouds but I paint a perfect picture for em

We seein clouds but I paint a perfect picture for em

I don't want you fallin 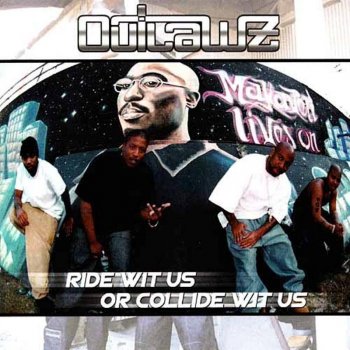 Ride Wit Us or Collide Wit Us Data di pubblicazione: 2000

I know mama, you did your best at raisin' me