Leave your name and your number at the motherfuckin beep

If dis one of my hoes, two-way me

So check it out, put this on there:

And we still smokin, what?!

For the nigga who be talkin loud and holdin his dick

For the niggaz who be claimin my hood

And really ain't from my gang, better LAY LOW

I hope he don't be thinkin I'm just talkin

And I won't do a thing, really HOPE SO!

Hmm, lay low, nobody move until I say so

See I don't go to clubs, I never chase a bitch (beitch)

I'm here to bang that gangsta shit to the apocalypse

We call it stress, some of y'all call it chocolate

Return of the Top Dogg, and ain't no stoppin this

Whatever the case, I ain't tryin to catch it

Unseen but well heard, do not disturb

The only reason you alive cause I ain't sent the word

I flip, faster than birds, Snoop Dogg will emerge

From the smoke and go loc, you shouldn't provoke

I bring the worst from the L.B.C.

Smash motherfuckers thinkin they gon' smash on me

Snoop and Dre give a FUCK about what y'all say

From the "World's Most Dangerous Group" - N.W.A

Our rise, it was no surprise

I always knew these fools would trip

Hatin, fakin, schemin on mine

And on the down low talkin shit

Best move cause I refuse to lose

No matter which damn road I choose

Top story on the evening news

I ain't for games, so if you wanna play 'em lay low

Lay down on the floor

I'm in a rage, so if we gotta do this let me know

That's what I came fo'

Where that nigga who be talkin shit?

He don't come around no more because I fucked his bitch

I made her suck my dick, while I was squeezin the tits

Then I hit it from the back, gripped tight on them hips

Dropped you off and seen you fishin on your raggedy Brougham

Coulda thumped you and the dog (you little fag)

And don't sag too hard, you show everybody your thong

From 22's to Luger's the shit that shoot through ya

Who you motherfuckers think the Top Dogg bang with?

The same click he came with and made the game flip

That's even tho' yo' CEO talk shit get slapped hard

The backyard is where we get our scrap on

The black car drive by then you get capped on

Whassup pimpin? It's P and Snoop

With Dre on the beat, this ain't nuttin but loot

They call me Jed Clampett for all the bread I got

I keeps it real-ah, cause I'm all about my scrilla

The ladies love me cause I'm a million dolla hitta 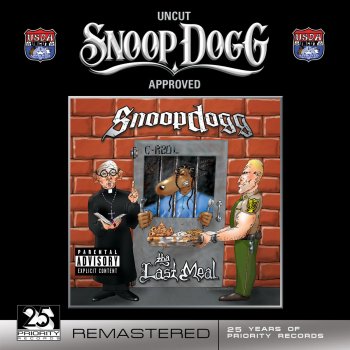 I just wanna make you sweat