It to the bang-bang boogie, say up jump the boogie

To the rhythm of the boogie, the beat

Now what you hear is not a test: I'm rappin′ to the beat

And me, the groove, and my friends are gonna try to move your feet

See, I am Wonder Mike, and I'd like to say hello

To the black, to the white, the red

And the brown, the purple and yellow

But first I gotta bang bang the boogie to the boogie

Say up jump the boogie to the bang bang boogie

Rock the riddle that will make your body rock

Well, so far you′ve heard my voice, but I brought two friends along

And next on the mike is my man Hank, come on Hank, sing that song

You see, I go by the code of the doctor of the mix and these reasons I′ll tell you why

I got bodyguards, I got two big cars, that definitely ain't the whack

I got a Lincoln continental and a sunroof Cadillac

So after school, I take a dip in the pool, which is really on the wall

Hear me talking ′bout checkbooks, credit cards, more money than a sucker could ever spend

But I wouldn't give a sucker or a bum from the Rucker, not a dime 'til I made it again

Everybody go: Hotel, motel, whatcha gonna do today (Say what?)

′Cause I′ma get a fly girl, gonna get some spank and drive off in a def OJ

You see, if your girl starts acting up, then you take her friend

It's on you so what you gonna do?

The beat don't stop until the break of dawn

Well, my name is known all over the world

By all the foxy ladies and the pretty girls

I′m going down in history

As the baddest rapper there ever could be

The beat starts getting into your toes

You start popping your fingers and stomping your feet

And moving your body while you're sitting in your seat

And then damn, you start doing the freak

Then you throw your hands high in the air

You're rocking to the rhythm, shake your derriere

Ya rockin′ to the beat without a care

With the sureshot MCs for the affair

Now, I′m not as tall as the rest of the gang

But I rap to the beat just the same

I got a little face, and a pair of brown eyes

All I'm here to do, ladies, is hypnotize

The beat don′t stop until the break of dawn

I guess by now you can take a hunch

And find that I am the baby of the bunch

But that's okay, I still keep in stride

′Cos all I'm here to do is just wiggle your behind

The beat don't stop until the break of dawn

Rock rock, y′all, throw it on the floor

′Cos I'm one of a kind and I'll shock your mind

I′ll put TNT tickin′ in your behind

I said one, two, three, four, come on, girls, get on the floor

′Cos I'm guaranteed to make you rock

I said one, two, three, four, tell me, Wonder Mike

What are you waiting for?

To the hip hip hop and you don′t stop

The rock it to the bang bang the boogie

Skiddlee beebop a we rock a scooby doo

And guess what, America: we love you

'Cause ya rock and ya roll with so much soul

You could rock ′til you're a hundred and one years old

But we like hot butter on a breakfast toast

Rock it up, uh, baby bubbah

Baby bubbah to the boogie the bang bang the boogie

To the beat beat, it′s so unique

Come on, everybody, and dance to the beat

To the hip hip hop and you don't stop

The rock it out baby boppa to the boogity bang bang

Boogie to the boogie, the beat

When I′m rappin' to the rhythm of a groovy beat

An attempt to raise your body heat

Just blow your mind so that you can′t speak

To do a thing but a rock and shuffle your feet

And let it change up to a dance called the freak

And when ya finally do come into your rhythmic beat

Rest a little while so ya don't get weak

I know a man named Hank

He has more rhymes than a serious bank

So come on Hank, uh, sing that song

To the rhythm of the boogie the bang bang the bong

The women fight for my delight

But I′m the grandmaster with the three MCs

That shock the house for the young ladies

And when you come inside, into the front

You do the freak, spank, and do the bump

And when the sucker MCs try to prove a point

I sit down and write a brand new rhyme

Because they say that miracles never cease

I'm gonna rock the mike ′til you can't resist

Well, I was comin′ home late one dark afternoon

A reporter stopped me for a interview

That I′m vicious on the mic and the turntables

This young reporter, I did adore

So I rocked a vicious rhyme like I never did before

The Casanova legend must have been true!"

Said, "I go by the name Lois Lane

And you could be my boyfriend, you surely can

Flyin' through the air in pantyhose

He may be very sexy or even cute

I said, "You need a man who′s got finesse

And his whole name across his chest

He may be able to fly all through the night

But can he rock a party 'til the early light?

He can′t satisfy you with his little worm

But I can bust you out with my super sperm!"

Just throw your hands up in the air 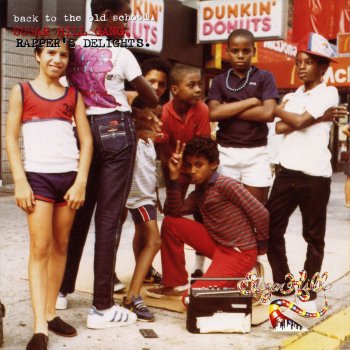 Do you wanna have a party?