Yeah, this just my life

Front to back, top to bottom

Everything's changing around me

These days don't feel the same

We all lost faith and lost family

Why must we play this game?

Lord have mercy on me

I've been a sinning man

Pull out my wings, jump off the bridge and crash in a plane

We live forever in my mind

It was like, May, I just moved to L.A., I was tryna figure it out

Medication for depression that I cut cold turkey, had the kid manic

In an episode out in Hollywood, wilding out like Nick Cannon

Railing Adderall pills out a dollar bill, on the bathroom floor

Clean the whole mess up with my nose, what the fuck I need a vacuum for?

I had that first meeting with Hov, plus I brought out the whole team

She came out the room swingin', hit me in the jaw

I was really tryna fend her off

I was tripping, dawg

Too proud to apologize or empathize, I blamed it all on her

Saying that she hit me first, even though she was the one hurt

When Kids These Days split, that shit felt like a c-section

But I couldn't even appreciate it at the time, I was going through too much

In Ibiza eating paella on the roof, tryna choose over breakfast

Hov wasn't with the bidding war, but I knew the Roc just felt right

When I saw Kanye at Wireless, without T-Pain, still a good life

Felt so close when Mr. Hudson introduced me to him backstage

He prolly don't even remember that shit... like a bitch off Backpage

But at that stage, I was ready to swing for the fence like a batting cage

At the same time, I was winding down a low point in my addict phase

Isn't that ironic? I was feeling so psychotic

Shit got bad out in L.A., so I moved back home to my mom's basement

Then I wrote "Rage," that was me screaming out through the pain

And "U Mad," addressing my relationship with Natalie, it was too bad

The violence and the lies slipped suicide into my mental health

Om'Mas came to Chicago in January at the perfect time

He said Kanye was working on an album, and Uzi played him one of our songs

He was tryna fly me out, nigga, it was goin' down like the Dow Jones

Pulled up to Westlake, first day I was there, I recorded "Wolves"

I knew I was the one, like Neo meeting with the Oracle

Crawled out on SNL

All the niggas hating on me back home lookin' at me like, "FML"

A lot of people coming out the wood like, "Let's work," tryna network

All the pressure making my head hurt, the molly wouldn't let the meds work

At this time it's like Feb. 1st to the 15th, and I'm still addicted

Ye and Hov getting into it over me, tryna do a joint venture

And G.O.O.D. Music still fam, but it's that Roc boy SAVEMONEY life

Took the bus out on the road for the Traffic tour, did a hundred nights

Cleaned out my closet, I got rid of all of my demons

If you learn one thing from my journey, nigga it's don't stop believing

We live forever in my mind

We live forever, still that life 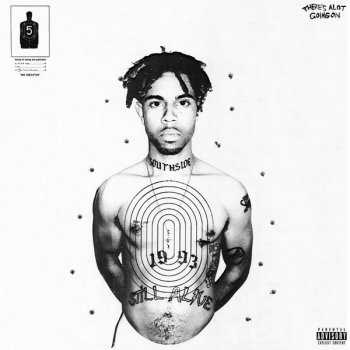