"This afternoon we want to talk about"

"Now I want you brothers to dig where we coming from"

Five yers ago when I was in high school

No bills to pay, I used to say to myself "Life is cool"

Washington High was the school I attended

Til '87 graduation came and I wasn′t with it

Kicked out the house at the age of 18

No money for college, mmm, how should I handle things?

I tried to go the so-called right way

And went to a JC but I wasn't getting paid

I'm working at a chicken stand now with the chicken

With a spring at the top of my hat getting clowned

To either keep doing what I′m doing, don't trip

So like anybody else I went and bought a gun

Pulling burgs at night and now I'm counting my funds

Three times a day and I drive a coup on danas

Cruising through the alley bumping on "Hi" to players

Yo, you can say what you want but I was taught on the streets

That if a brother didn′t work, then he didn't eat

Peep this, something kind if for weakness

Focus on the park and watch how I freak this

Subject for survival, got to stay alive

I gotta eat so I do or die

Not a full-time crook but I was born right

So if I want to eat, sometimes I got to jack

So jack I will and go get some presidents

Money ain′t everything but either is brokeness

Give me a knife cause I can't live off happiness

Standing on the corner in a soup line

Said he's too black, too strong, ain′t done nothing yet

Waiting on the fifth for his government relief check

Humming and bumming, most hate to see him coming

And every first and 15th, these strongs on his life

That's why I′m real and I ain't afraid to steal

Straight from the street, backed up by a funky beat

If you don't work, OG, then you don′t eat

"You don′t work, you can't eat" Ayo, I want y′all to meet a nigga from the Lench Mob

He gaffled for his meals (McDonald's is my spot)

If you don′t work, you don't eat, need I say more?

Since I was 14 I raised myself

I sold cooked-up rock, made my way through school

Kicking???, playing to start your back

Talking about that bullshit prize, you slay me right?

And you other motherfuckers out here banging for change

Need to wise up and seek personal gain

Or maintain some type of pain

Cause they don′t give away hot lunches out here in L.A.

Yo peace to the Dub and the Maad Circle

For giving me the chance to let the rhyme just flow

Jay Dee (I′d rather roll with the Lench Mob)

Eiht is stepping from the city down under

Ain′t no punching a clock, I ain't with it

For a quarter an hour I make the shit every minute

And please, don′t even let me catch a brother slipping

He'll be short, shorter than short

With my hands around his troat

Fool, come off the chain and bracelet

I know it's wrong but face it

Cause I was taught get what you′re gonna get quick

And don't get gaffled in the mix

So I guess I′ll keep stacking, breaking the law

Checking a fool, wrecking and breaking his jaw

This record was put together by Jay Dee, Coolio, and the W

Sic brothers out to get paid cause

Nowadays you got to go for yourself or go broke

So save that drama for your mama

Or have your first name changed to R.I.P.

Testo You Don't Work U Don't Eat powered by Musixmatch 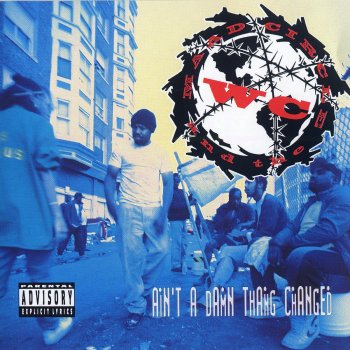 Tutti i testi di WC and the Maad Circle

WC and the Maad Circle: i testi più cercati

WC and the Maad Circle

(Gee, I wonder who this poem is about?)