That's why we're the best, have a conflict

Then we go and do somethin' fresh

Don't get test with levels are way higher

I shoot for the target, call me aim higher

Merk guys on the mic and up the hype light

Wiley, Wiley you're on a hype

Shut your mouth blud, I was born on a hype

See, you don't know this could be your last night

That's why you can't dark me, join the nasty

Won't work, end here, I'm worth two dubs, none of the marvy

I'm hardly touched, I got an army though

They'll rain on, how'd you think your got your chain on

You shit bricks when I bring the pain on

Better switch your brain on, you can see I'm way gone

Look back, the game's gone you got caught up in

That's why I'm a grafter the tag team master

Don't know now you will realize after

I've made my mark with permanent marker

You can't say that my style ain't harder, hot like Nevada

I ain't dead like the Wiley in lethal saga, nah, I'm a leader

See a girl once, she'll call me a charmer

Albums doin' well so I want a grime single

Can't wait, I just wanna do my single

Why should I listen or mingle with a label

That's not gonna do a grime single

When I merk one of them 20 man back it

You won't see me in a protection racket

I know the roads hard, I know you can't hack it

That's why I've got to teach you, always back it

Even if you're scared, I'll be there, I'll rack it

I'm a soldier, I'm older, I cause world traffic

You crew won't manage but wait, don't plan it

Go home and tell yourself you won't have it

Guns do bangin' it, I ain't sayin' go home

Get a gun and come back and start bangin' it

My words to you will be your not havin' it

F the western, F the system, I don't care

I've got my own system, are you listening?

The weather wont change, there will always be some

That's why I'm still a fighter, the star in the sky

That shines brighter, the east side rider

It's a shame how people ain't tighter

We can be a powerful team so what we doin' then?

Everybody tighter, gotta be a fighter

Then, push up your lighter

It's the second phaze, more peace for the boy

Your never gonna take no G's from the boy

'Cause he ain't one of them boys, believe in the boy

There ain't no chief in the boy

That hates him for the wrong reason

Can't get along with the boy, don't chat to the boy 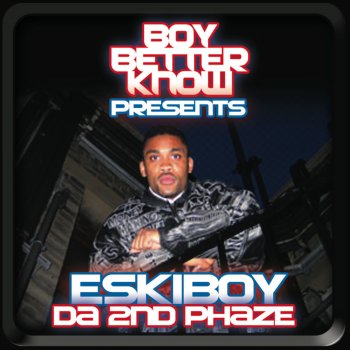 Iced out down, girl, keep it on loyal