To Whom It May Concern testo

Guarda il video To Whom It May Concern

And, um, it seems that I've created some confusion

He told me straight up, people don't know you like I do, man

I guess I haven't said enough, or maybe I've said too much, I don't know

Or what I represent

I grew up in the deep gutter

Raised by wolves, church steeples, and a single white mother

With Dukes of Hazzard for bed covers

Practicing moonwalking with a broomstick in the kitchen, popping and locking

No BET on television, we didn't have it, we had the rabbits

The 10-4, mason jar on the counter full of bacon oil

Now looking back, talking 'bout freedom, yeah you were spoiled

Oblivious to the hideous crimes from the insidious minds

That took place right below us on the Southern soil

The blood and the pain left a recoil

Ghosts of Confederate veterans in the wind

Backwoods are haunted with the death and the sin

We buried these wicked ways, the world is still turning

And these motherfuckers with they crosses is still burning

Yeah, I seen 'em at the courthouse

Not really sure what they're trying to prove still

Jumped up on mountains they're still trying to move hills

And their daughters probably listen to Dru Hill

So Jesus come take the wheel

No, you steer drunk

The truth here it come

I'll show you how these country folks pop that trunk

Uh, and my honesty is modest

But at that very moment my picture got painted

Call it God, call it what you will

I took the American and the Confederate flag

Threw it in my back pocket, I even went and got tatts

And these redneck brothers of mine, playin' that 3.6

In a fucking cornfield, in big trucks with lift kits

Oblivious to the beauty of juxtaposition

They had no idea how special it was to witness

Them in deep Alabama playing Snoop and Group Home

Big Hank and Metallica, I discovered a new zone

And Catfish Billy, a way for me to talk about it

America made it clear that we were backwards, wrong, behind, and segregated

I polished up my tone, I signed to Shady and brought a record deal home

Respect from the OGs, cosigning my songs

First it was Bun B, then Raekwon, and TIP

Then all of these MCs wanted features from me

But I was a live wire, my tongue was a fuckin' blade to these critics

Who didn't get it, the clips from the grenade in my teeth

A little too unique, the market for me was smaller than some thought it would be

Even me so I looked in the mirror

Saw the Jordans, the gold chain, my shirt—Pantera

Rebel flag in my pocket, RED tattooed on my neck

Heart of Dixie across the stomach and it ain't clicked yet?

Maybe I wore the wrong shoes back to the woods because these suede No. 5s can't get wet

So after Radioactive I took my shit back home

But mainly I was in Nashville getting back to my roots

Explorin' music with Love Story, I made it my truth

Dropped a single called Til It's Gone and travelled the globe

I started seeing rebel flags everywhere at my shows

I didn't think nothing of it, I assumed that they get it

I'm on some New South shit, but I have to admit it

I saw the posts up on Instagram proclaiming I'm racist

I started taking it personal 'cause I treat people equal

Homie, I got mixed kids and music is how I feed 'em

Lo and behold as I'm saying this I discover this evil

White boy went in a church and killed 9 innocent people

Goddamn, hold on, moment of silence

There ain't no fixing that ever, those people brutally slain

And I refuse to see ways to justify all the blame

I got so mad at my own image, I took down merch

No explaining it now, it's only making it worse

This fucking coward, this criminal's, just a puppet, a mental case

But the truth is the truth, he did it because of race

There's nothing I can describe, the shame that I felt inside

A white boy with the flag committed this homicide

I tried solo to defend the South, and yes it was my decision

My interviews broke on the internet, you can see my vision

I never thought myself to be like a politician, just a witness to the sickness

That I built from the love and the wisdom

I'm trying to find my way

But now I'm feeling imprisoned from the stereotypes

I was prepared for the fight

Hell, I'll be stereotyped until my burial site

I married a loaded gun when I married this mic

'Cause what I cannot lose is the respect that I've gained

Friendships I cherish, fuck the money and fame

Black American culture is in the thread of my veins

It's rock'n'roll till I die, I'm just a rebel in shame

Yes I apologize for me and anybody with that flag

Honestly, any proud Southerner is sad

Imagining him dead because of that piece of trash

I got nephews, nieces, who need this, peace between this

But media is fiendish

So if you feel like you're above it or beneath it

Have a logical mind about who your team is

And when you look at me, dawg, don't look at me like another branch off a tree

Lord, I took this shit and balanced it the best that I could

Try to hold up the wood of America's old see-saw

But this ain't Hee Haw with MeMaw

We ain't on the Cosby Show, are we, bro

Daddy may give a goodnight kiss, but I can promise you this

That you ain't promised tomorrow

I wish I could go back to the innocence

I remember my friends with no differences

But pigment is relative, isn't it

You inspired this verse, I got your back and let's live with this

It is what it is, we cannot fix all this ignorance

Slumerican flags up, it's over, I'm ending this

Testo To Whom It May Concern powered by Musixmatch 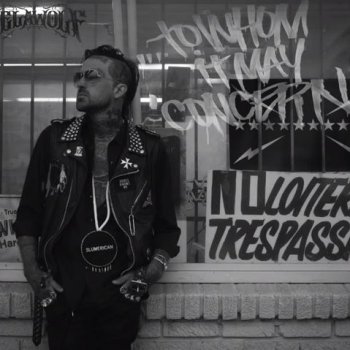 To Whom It May Concern Data di pubblicazione: 3 novembre 2015