You know, life is funny

If you don′t repeat the actions of your own success

You won't be successful

You gotta know your own formula, your own ingredients

What made you, you

Listenin′ to Africa Bambaata give the order

The call of the order was to avoid the slaughter

He said, "Record companies ain't got nuttin for ya"

Without a lawyer, he taught The Infinity Lessons

In how hip-hop could be a, many a blessing

There was no debate, we had to end the hate

The name of the game was Stop the Violence

And unity, knowledge, and self-reliance

Had these ghetto kids goin′, huh, what about him?

But his freedom of speech is declined

East coast, West coast, who is the best coast?

Lookin' back now, of course it was bogus

The whole argument was where we lost focus

We got hopeless, not with the lyrics and music

But with hip-hop, and how we used it

Or abused it, you know how the crew get

With Human Education Against Lies, we tried

To talk about the state of humanity

But all these others rappers got mad at me

They called me Captain Human, another message was sent

Self Destruction don′t pay the rent

Remember that? Nobody wanted conscious rap

Where can they call us at? All was wack

Hip-hop culture was fallin' flat and that was that

They said, "Yo Kris, what you wanna do?"

I said, "Damn, why they wanna get with me?

If I bust they I′m contradictory"

If I play the bitch role, they take my shoe

Tell me what the am I supposed to do?

All of a sudden these critics they wanna spit it

Kay Are Ess One is contradictory

Just ′cause I wouldn't let these rappers get with me

That, you and your pen

If a rapper wanna diss, yo I'd do it again

But I′m makin′ these ends, and I got my friends

And I really don't wanna have to sit in the pen

So I go back to the philosopher

Go back, check the facts

It wasn′t all about the loot

It was all about Harry Allen Rhythm Cultural Institute

Nobody okayed it, they′d all rather hate it

We put together somethin′ called the Temple of hip-hop

But how hip-hop affects the spirit

Step Into a World, that's what I did

To clothes and hoes, but that wasn't me

I′ll be damned if I dance for the MTV

Should I go now, or should I really wait?

And took a gig with the WB

To have a full heart, full body, full mind

But you know what the problem is or was

DJ's don′t raise our kids, 'cause

They so caught up in the cash and jewels

How they gonna really see a hip-hop school?

How they gonna really see a hip-hop temple?

They don't even wanna play my instrumentals, but

Especially Xzibit, he was there in a minute

Mic Conception, all of them, said

Yo you need help? I should call them

Bloods, Crips, they held me down

With the gat in the lap in the low-ride

Julio G, that was the crew

The list goes on and on, let me tell ya

FredWreck, and my man Protest

Much respect, no less

To my spiritual and mental defenders

Big up to L.A., temple members

So I picked up the mic and I quit my job

Said to Simone, I gotta get with God

She said, "Don't worry bout these dollars and quarters

Record companies ain′t got nuttin' for ya"

Damn, she took me back to Bam

Took me back to who I am

Brought me back to the New York land

{Now KRS-One, now you′ve been quoted as saying that

Explain that to us please}

{Well, well, today hip-hop, we are advocating that hip-hop is not

To view the world

And we look at hip-hop, in it's 9 elements

{And uhh, that′s where y'know

We come from the uhh the root of, of Kool DJ Herc

Who originated hip-hop in the early 70′s

And then Africa Bambaata and Zulu Nation

Who instigated something called The Infinity Lessons

And added consciousness to hip-hop, and then Grandmaster Flash

With the invention of the mixer, on to Run-D.M.C. and then myself}

{And uhh, we created the Stop the Violence movement, you may recall

A song, Self Destruction and and and so on

All of this, goes to uhh uhh, the idea of living this culture out

And taking responsibility for how it looks and, and acts in society} 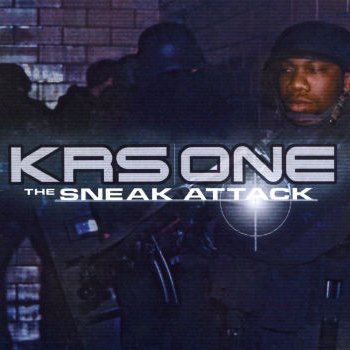 That's the sound of the beast!